IN 2014, “CULTIVATING GOOD WATER” IS CONSOLIDATED AS AN INTERNATIONAL PROGRAM 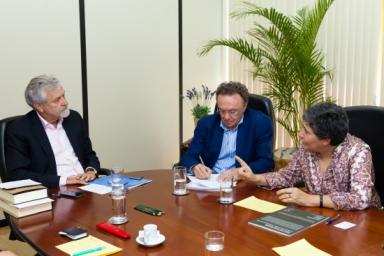 Planeta Orgânico was present at the “2014 Cultivating Good Water (CGW)” event in Foz do Iguaçu, State of Paraná. Organized by Itaipu Binacional, the event brought together authorities and representatives from different States in Brazil and from other countries.

The internationalization of the Cultivating Good Water (CGW) program, led by Itaipu and with the participation of hundreds of partners from Western Paraná, was consolidated in 2014. In addition to the adoption of the CGW methodology in twelve micro river basins around Latin America, there are two others in Spain, and the interest shown by international bodies and governments in the program is increasing.   Several of them are represented in the CGW annual meeting, which started this Wednesday (19th), at Foz do Iguaçu.

In the opinion of  Josefina Maestu, the director of the United Nations’ program “The Water Decade”, the CGW calls one’s attention because of the “very strong level of commitment” shown by all players involved.  “It is the UN’s responsibility to pay special attention to good public policies and good practices, in order to make these experiences available to all the Member-States.   And we are recommending Itaipu’s experience with the CGW to the governments that contact us”, she declared.

The European Parliament is also interested in the CGW program. MEP Inés Ayala, who took part on Tuesday (18th) in the Water Security Seminar, in Foz, informed us that she will present the program in the review of the Water Quality Directive (a set of objectives and parameters for the European Union countries in relation to water resource management), in 2015.

“We had a Directive for the 2010-15 period, which will be now reviewed. I believe there are many things that we can learn from these 11 years the Good Water program has existed, especially in relation to the methodology for increasing the participation and empowerment of the communities.  Another important aspect is management per micro-basin, and the way in which the roles of players are defined in relation to recovery projects. In Europe, management is carried out per basin, but the roles are not very clear, including in the way resources are applied”, she explained.

Some concrete experiences in the replication of the CGW methodology are found in the same River Plate Basin context. According to the explanations given by José Luis Genta, of Uruguay, General Secretary of the Intergovernmental Committee for the Coordination of the River Plate Basin (“CIC”), this entity, which had lost its political role after the Mercosur was formed, changed its vocation to support for sustainable development in the region and the execution of the Marco program (for the management of water resources, with the support of UNEP).

“In this context, the CGW program appeared as an element with great potential for integration among the River Plate countries. Today, we already have similar programs in the basin’s two other binational companies (Yacyretá and Salto Grande), and other pilot projects with the CGW methodology are being implemented in Argentina, Paraguay and Uruguay. We now want to expand these projects”, said Genta, stressing that 60% of the South American territory belongs to the three large basins in the continent (the Rivers Amazonas, Orinoco and Plate). That is why the socio-environmental management of these territories is so important. In all, six micro-basins are being dealt with by Yacyretá and Salto Grande.

Another concrete experience in cooperation is in Spain, more precisely in the Basque Country, where Europe’s Green Capital, Vitoria-Gastéiz, is situated. The town already has a program similar to CGW, but focusing on the management of the urban area. Now the idea is to restore the micro-basin of the River Zadorra, an affluent of the River Ebro, which flows through the town.

According to Iñigo Bilbao, director for International Relations of the Municipality of Vitoria-Gastéiz, the CGW methodology will be applied in various initiatives, such as the restoration of the River Zadorra’s banks, promoting agro-ecology and the cultivation of medicinal plants, always reproducing the same criteria of governance in partnership with local communities, the Itaipu program’s main characteristic.

“Our medicinal plants are under threat. We are creating a germ plasm bank with the Botanical Gardens, in order to preserve them. We believe that with a program like the CGW, that is, to incorporate phyto-therapeutic products into the health system, we can strengthen this effort”, declared Bilbao.

In 2013, the CGW became a cooperation policy of the Brazilian government, with the support of the Brazilian Cooperation Agency (ABC) and the National Waters Agency (ANA). At that time, an agreement was signed for the replication of the CGW methodology among eight Ibero-American countries.

The partnership with Vitoria-Gastéiz takes place in this context, and pilot projects are already being implemented in Guatemala and in the Dominican Republic, as a result of this agreement. In addition to the above-mentioned countries, representatives from Nicaragua, Chile, Costa Rica and France are also taking part in the 2014 CGW Meeting.

Another CGW experiment that will start soon in Spain is in the area surrounding Madrid. The Environmental Vice-Counselor for the Spanish capital’s Town Hall, Enrique Ruiz, explained that, just like Vitoria-Gastéiz, the local government wishes to replicate the Itaipu program in the rural area, thus complementing the water management carried out in the urban sphere.

“We want to give greater sustainability to the agricultural and cattle-raising activities practiced around Madrid”, Ruiz declared. “I believe that CGW’s main value is to unite people around the water and territory issue”.

In Guatemala, the CGW is being implemented – identifying players and increasing their awareness – in three micro river basins connected to the hydro-electric projects of “El Porvenir”, of the National Electrification Institute (Inde), and Renace 4, of the Multi Inversiones consortium, as well as the El Escobal mine, of the San Rafael mining company.

“In our understanding, the CGW offers an answer to the social demands of the communities situated around these projects, besides providing a model for dialogue with these communities. And it also contributes to water preservation, makes hydro-electricity viable, and increases the degree of knowledge of hydro-electric projects”, said Carmen Yolanda Magzul López, of Guatemala’s Vice-Ministry for Sustainable Development.

In the Dominican Republic, there are three other micro-basins (Rio Grande, Arrio Gurabo and Rio Maimón); they are all close to mining facilities. Last October, the Workshops of the Future were held (a method for the diagnosis of problems and action planning, based on Paulo Freire).

“The CGW is a social engineering tool for integrating communities with the environment. In addition, it is also a tool that makes it possible to shape the management committee with direct participation of the most vulnerable, together with the public and private sectors”, declares Yossi Abadi, advisor to the Ministry of Energy and Mines and director of the CGW in Guatemala.