The Water for Life award will be handed to directors of Itaipu Binacional at the UN Headquarters, in New York, on March 30 next. This was announced last Friday. Just before World Water Day (March 22), and at a time of water scarcity in several regions of Brazil, causing an impact on the supply of water and on electric power production, a Brazilian initiative was selected by the United Nations Organization (UN) as the best water resources management policy on the planet. It is the Cultivating Good Water Program (Cultivando Água Boa – CAB), developed by Itaipu Binacional and more than two thousand partners in the Paraná 3 Basin, in the Western region of the State of Paraná. 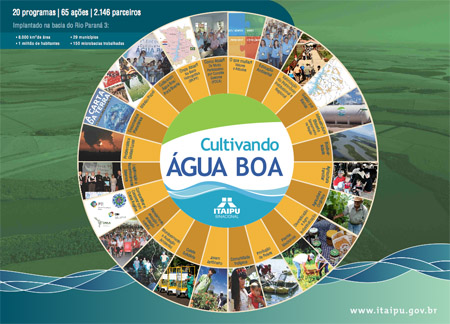 The granting of the award was announced last Friday (20th), in India, by UN-Water. The Itaipu program competed with 40 practices from all over the world and won the 1st place in the “Best Practices in Water Management” category for the Water for Life Award 2015. Another 25 practices competed in the category “Best Practices in public participation, education, communications and/or awareness building”. The award, granted by UN-Water, will be conferred at the UN Headquarters, in New York, on March 30 next.