GREEN RIO 2017 CONSOLIDATES ITS POSITION AS AN INTERNATIONAL EVENT 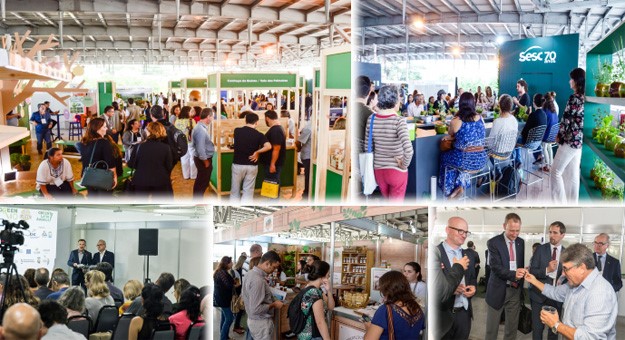 Green Rio has been consolidating its position as an international event, and the 2017 edition, with the participation of Germany, France, CEAL (Entrepreneurial Council for Latin America) and Banco Centroamericano de Integración Económica (Central American Economic Integration Bank) is an indicator of this fact.

A total of 2873 people and 74 exhibitors in the fair were present at Green Rio/Green Latin America 2017, held at the Glória Marina, Rio de Janeiro. Visitors and exhibitors from twelve countries, twice the number of nations in relation to 2016, represented a rise of about 10% in the number of participants in comparison with the previous edition.

The bioeconomy was an overarching theme at Green Rio 2017, and Roberto Rodrigues, former Agriculture Minister, an Ambassador for Cooperatives at the FAO and the Coordinator of the Agribusiness Center at the Getúlio Vargas Foundation, gave the opening address for the event to a packed auditorium. Roberto Rodrigues spoke about Brazil’s privileged position in relation to the possibilities of the new Bioeconomy market. “Its potential is related to competitive and sustainable agricultural production, abundant natural resources, biodiversity, advanced production of renewable fuels, and very dynamic biotechnology, especially in the agricultural area.” With regard to the cooperatives’ role in the bioeconomy, Roberto Rodrigues pointed out that: 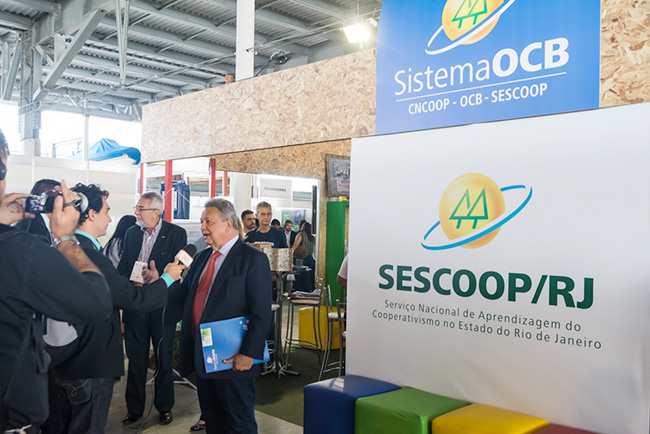 The Brazilian cooperatives were represented in an area sponsored by the OCB (Brazilian Cooperatives Organization) system; and Neilton Silva, Chairman of the SICOOB (Cooperative Financial System of Brazil) for the State of Rio de Janeiro, took part in the Panel on Green Markets and Sustainable Purchasing, whose moderator was Geiza Rocha. Neilton Silva spoke about the importance of the Credit Cooperative for local and regional development. The panel also had the participation of Frank Kraemer (GIZ), coordinator of a project that promotes a strategy to reduce deforestation in the Amazon region, involving the States of Acre, Amazonas, Amapá and Pará; and Cristina Cuiabália, Manager of the Sesc Pantanal Private Nature Reserve, with 65 research projects already carried out, and with the academic training of over 170 researchers coming from almost 50 education and research institutions. 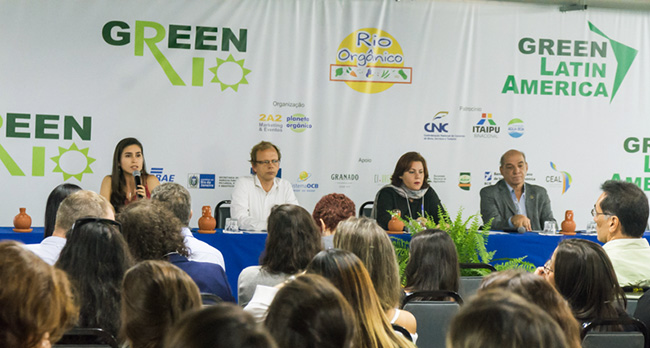 The Presence of the German Bioeconomy Delegation at Green Rio

In order to present its national strategy – “Bioeconomy 2030” – in which 2.4 billion Euros have already been invested, a German delegation, led by the Bioeconomy and Forests director of the German Agriculture Ministry, Clemens Neumann, sponsored the first German-Brazilian Bioeconomy Workshop, held during the Green Rio event.

In the German-Brazilian Bioeconomy Workshop potential partnerships between the two countries were presented and discussed. Topics such as Bioenergy, Biomass and Sustainable Agriculture were addressed before a full audience.

The German delegation visited several Green Rio booths, which enabled them to get an idea of how varied Brazil is and how the country can be a strategic player in the Bioeconomy scenario.

In the Cosmetics and Biodiversity panel, Jean Luc Ansel, executive director of the Cosmetic Valley – the largest cosmetics cluster in the European Union – presented the Cosmetopeia project, whose objective is to promote traditional knowledge hand-in-hand with innovation in the cosmetics sector. Regina Diniz, of SEBRAE – a service that supports medium and small businesses – presented SEBRAE’s cosmetics program, especially the Structuring Project for Amazon Forest Based Cosmetics, in which seven of Brazil’s States participate. Fernanda Chaves Beltrão showed how biodiversity is present at GRANADO.

The multinational company L’Óreal, and Granado, a traditional cosmetics chain founded in 1870, took part in the event’s business rounds, and Granado promoted its products in its own booth.

In the panel on Beauty, Fashion and Sustainability, whose moderator was Fabiana Souza Melo (SEBRAE RJ), Newman Costa, also from SEBRAE, gave a presentation on “PIRARUCU: a sustainable alternative for the fashion world”, pointing out the total use of this Brazilian fish, which is farm raised, and also caught in the wild under government control.

The partners of Salão Crystal, Alfredo Pedrosa and Mandy Cruz, showed their concern about how containers for shampoo, dyes and other products used at beauty parlors are disposed of. 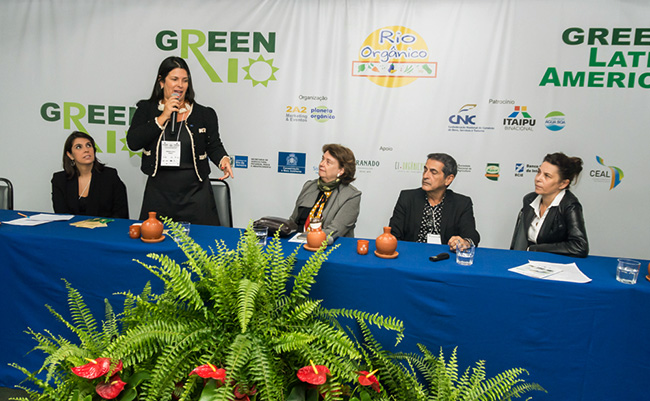 International Strategies and Investment in Sustainability

There was a debate on international strategies and investment in sustainability. The participants were Marco Contardi, of FGV; Fábio Ramos, Agrosuisse; Mauricio Moura Costa, BVRio; and Miguel Spohr, of the Brazil-Germany Chamber. Alvaro Werneck of Planeta Orgânico was the moderator. Fábio presented data on the appreciation of land receiving investments through sustainable management. The potential for international investments was presented by the other participants; examples were FGV, which has an office in Germany, and marketing mechanisms such as BVRio’s environmental stock exchange.

Organic products are always present at Green Rio, both in the booths of traditional producers, such as Sítio do Moinho and Solo Vivo, and in the participation of Fazenda Alliança, the space dedicated to Agriculture of the State of Rio de Janeiro, and the producers present at the SEBRAE’s Biodiversity Square – one of them being Fazenda Vale das Palmeiras.

As a first-time exhibitor at Green Rio, Granado, a company with a history of over one hundred years in cosmetics, brought in an impressive booth, offering massage and their Terrapeutics, BioEssência and Multi Vegetal product lines. They also participated with natural cosmetics. 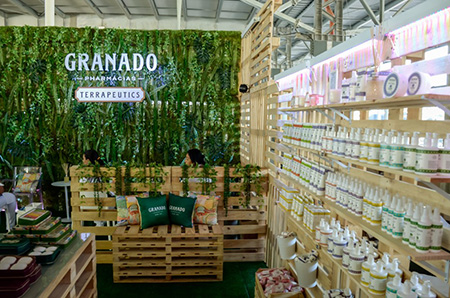 In 2017, Green Rio inaugurated the Green Latin America area, with the support of CEAL (Entrepreneurial Council for Latin America) and the participation of Cosmetic Valley (France), the National Agricultural Society, the Brazilian Association of Beverage and Food Exporters (A.B.B.A.), the Brazil-Germany Chamber of Commerce and Industry, and Interfreight (international logistics).

Also in relation to the “organics” theme, a well-attended panel on the Organic Seed Market was organized by the Organics Intelligence Center (CI Orgânicos) / National Agricultural Society (SNA), in partnership with Planeta Orgânico. The panel’s moderator was Sylvia Wachsner, CI Orgânicos coordinator; and Rogério Dias, the Agroecology coordinator of the Agriculture and Food Supply Ministry (MAPA) started the debate with a historical presentation on seeds.

Technologies in agroecology and organic raw materials could also be found at the Agriculture Ministry’s booth, in partnership with Sebrae RJ.

Producers, researchers and the global organic seed marketing company BEJO took part in the panel. In the opinion of Luiz Carlos Demattê, general coordinator of the Natural Agriculture Research Center of the Mokiti Okada Foundation, the production of organic seeds is a great challenge. “We have a potential market, but it is still far from being profitable. What moves us is this huge loss in biodiversity in conventional production systems, in terms of varieties offered”. 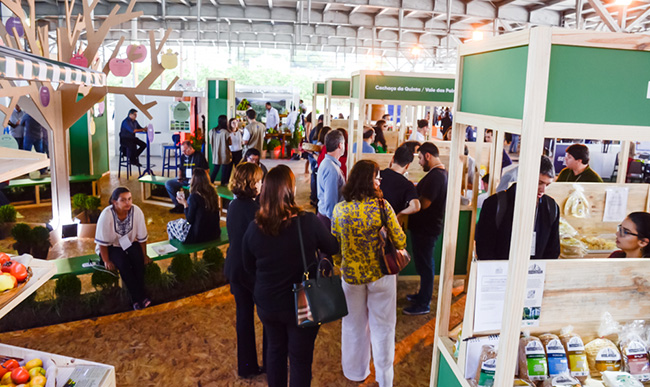 The panel on Bioeconomy in Industry and in Agribusiness, whose moderator was Marília de Sant’Anna Faria (SEBRAE RJ), brought in various links in the Bioeconomy chain – from the University, represented by Professor José Vitor Bomtempo (UFRJ), to the importance of small companies, represented by Victor Ferreira, National Bioeconomy Coordinator of the Sebrae System. 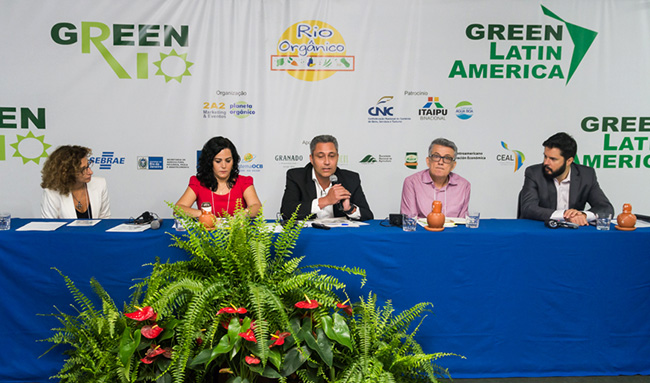 Gabriel Kropsch, Vice-President of ABiogás (Brazilian Biogas and Biomethane Association), demonstrated how this source can provide greater energy security for Brazil and generate income from clean, cheap and sustainable energy. “Biogas in Brazil has a potential equivalent to 25% of the country’s energy, and can help the country to achieve its goals regarding the reduction in greenhouse gas emissions”, in Kropsch’s assessment.

Helga Hissa brought examples of Water+Agriculture Management that multiply the adoption of good practices; this is what occurs in Rio Rural, a program that has received an award from the United Nations.

Marilia Sant’Anna was also the organizer of one of the most visited booths, the Bioeconomy RJ area, where university students’ initiatives involving biotechnology innovations were presented. 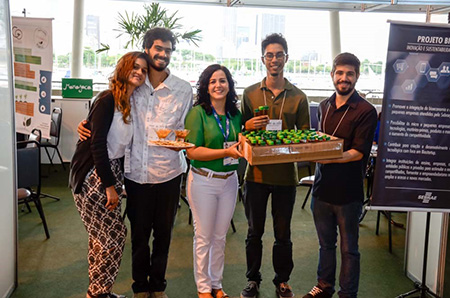 Frederico Grechi, Chairman of the Agrarian and Urban Law Commission of the Brazilian Lawyers Institute (IAB), spoke about Sustainable Development and Agrarian Law in the 21st century, pointing out that in the exploitation of land the principles of productivity, social justice and sustainable protection of an ecologically balanced environment should be observed.  Law Professor Maria Cecília Ladeira de Almeida, Technical Director of SNA and a former Federal Prosecutor, pointed out that agrarian legislation has always touched on environmental sustainability, as may be seen in the 1988 Federal Constitution, the Land Statute or complementary laws. The most significant example is the social role of property, which has as one of its parameters the conservation of natural resources, directly reflected in provisions related to large properties, expropriation for agrarian reform, zoning, taxation, official settlements, social assistance and agrarian contracts.

Ingo Plöger – Chairman of the Entrepreneurial Council for Latin American – opened the panel on Bioeconomy in Latin America and the Caribbean. In his presentation “Latin America is more of a solution than a problem in the agenda for the future”, Ingo Plöger showed how Latin America is in a position to benefit from Megatrends. Adrian Rodriguez (CEPAL) showed the bioeconomy in Latin America and the Caribbean from the perspective of the Water, Energy, Food Nexus. Adrian pointed out that there is a need for a better understanding of the bioeconomy’s potential regarding sustainable development.  Sergio Angheben gave a presentation on behalf of Itaipu Binacional, which also promotes the Water, Energy, Food Nexus. Sérgio presented the various actions that Itaipu already carries out in the Bioeconomy, such as renewable energy, biomass and organic farming. Anisorc Brito, who represented Banco Centroamericano de Integración Económica, presented the bank’s core activities, among which Rural Development and the Environment stand out. 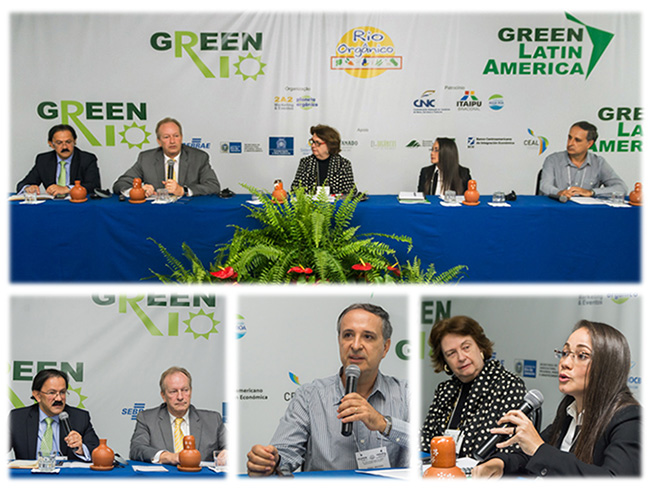 The theme of Healthy School Meals was the highlight on May 13, in a panel opened by Professor Bent Mikkelsen, of Aalborg University (Denmark), indicating the importance of school meals as an agent for transformation. Based on Mikkelsen’s speech, the other participants in the panel gave their contributions, applauded by the audience. Teresa Corção’s excellent presentation highlighted the need to value family farmers.

When Julio Cesar Barros, Coordinator of Green Areas of the Sub-secretariat for the Environment, mentioned that Rio de Janeiro has 1,600 schools that need a supply of organic products, Marcos Palmeira immediately proposed a partnership to supply schools in the Municipality of Rio de Janeiro.  This proposal was applauded and a challenge was set during the panel. Mariângela Rossetto, Sebrae RJ, mentioned SEBRAE’s interest in continuing the Healthy School Meal Project, very well represented by the Education Secretariat of Paraíba do Sul, one of the winners of the 2016 Healthy School Meal Award.

Fábio Ramos, of Sítio do Moinho, stressed that the education of consumers and of players in the dining-out segment is an indispensable factor to increase the presence of organic food in restaurants.  Monica Rocha, of Comida do Amanhã (Tomorrow’s Food), spoke about the need to include the “game” aspect of food when addressing the topic with children. This panel was the perfect ending for the Green Rio Conference, and gave further encouragement to those present to taste the products displayed at the Fair, with a different perspective. 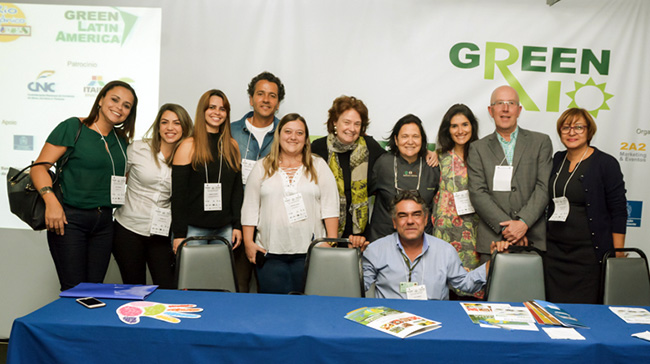 Green Rio was acknowledged as an event that acts as a catalyst for business, innovation and sustainable initiatives, a platform for the Green Economy.